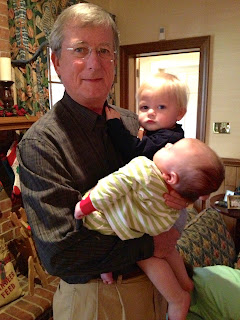 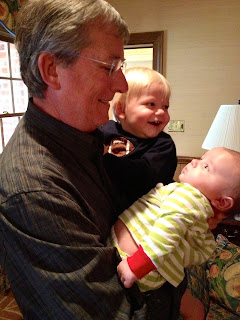 My dad, with my boys…and yes, he’s holding both of them at the same time!

I hope y’all had a wonderful weekend!  Little E was sick, so we did a lot of resting up and watching The Polar Express (they’re obsessed!).  And thank the Lord for amoxicillin!  Although, I think L has come down with the same cough, cold, etc., so I may dealing with this for awhile, if they keep passing it around to each other.  I swear this time of year, they keep this runny cold until the weather gets warmer come spring.  C’est la vie!  My youngest sister is in town for Christmas break, and another was in town from Asheville for the weekend, so we visited my parents’ on Saturday morning, but that’s about the extent of our outings for the weekend.  Here’s hoping all this rest and down time pays off, and the kiddos stay well over the Christmas break.  Saying a prayer right now!

I wanted to take a break in my How I Do It series to feature this article from The Huffington Post.  I have a feeling all you mothers out there will completely understand and relate to this article.  Enjoy!

I’ve gotten a lot of emails from women saying they feel overwhelmed by motherhood. Not in a dangerous way, just in a “I totally suck and I don’t know how I’m supposed to manage all this” kind of way.

To this I say, you’re not supposed to.

If you think about it, if you had a baby thousands, if not hundreds of years ago, you would have had your mother, all your sisters (all of whom were probably lactating) and your nieces all taking care of your baby. They would help with food preparation, show you how to manage and make sure your baby wasn’t eaten by a bear. Your kid’s feet probably wouldn’t have touched the ground until they themselves would be able to carry around an infant.

Back then, the point of a child was to have free labor in the fields and someone to take care of your old a** down the road, and not much more.

As for the past generations that like to tell you that they raised six kids on their own and did it without a washing machine? Well, sort of. Keep in mind child rearing was viewed pretty differently not that long ago and you could stick a toddler on the front lawn with just the dog watching and nobody would bat an eye at it — I used to walk to the store in my bare feet to buy my father’s cigarettes when I was a kid. As a mother, you cooked, you cleaned, but nobody expected you to do anything much more than keep your kids fed and tidy.

My grandmother used to tell the story about how she forgot my mother at the grocery store in the early ’40s. She walked up to the store with my mother sleeping in her carriage, parked it outside with all the other sleeping babies (I’ll let that sink in), went inside to do her shopping, then walked home, forgetting that she’d taken the baby with her. She quickly realized her mistake and walked back and retrieved my mother, who was still sleeping outside the store.

There were no flashcards, there was no sign language (unless you were deaf), there were no organic, free-range bento boxes — your job was to just see a kid through to adulthood and hope they didn’t become an idiot.

Hey, I’m not judging, and I’m not saying one way is better than the other, but I’m just saying that we are part of a generation that considers parenting to be a skill. Like a true skill that needs to be mastered and perfected and if we don’t get it right, we think our kids suffer for it — and that’s hard sh*t to keep up with. That’s not to say other generations didn’t have it tough or think parenting was important, but there just wasn’t the same level of scrutiny that could be liked, tweeted or instagramed all at once.

You are in the trenches when you have a baby. To the untrained eye it seems pretty straightforward and easy — you feed them, you bathe them, you pick them up when they cry — but it’s more than that. It’s perpetual motion with a generous layer of guilt and self-doubt spread on top, and that takes its toll.

We live in a time when we can Google everything, share ideas and expose our children to amazing opportunities, but anyone that implies that they have it figured out is either drunk or lying (or both), so don’t be too hard on yourself.

Your job is to provide your child with food, shelter, encouragement and love, and that doesn’t have to be solely provided by you either — feel free to outsource, because they didn’t just pull that “it takes a village” proverb out of the air.

Mommy and Me classes, homemade lactation cookies and learning Cantonese is all gravy, and if you can throw them in the mix once in a while, good on ya, Lady. I have about 9,000 things I’ve pinned on Pinterest and I think I’ve done four of them, which is fine by me, because those are above and beyond goodies, and not part of my just-scraping-by norm.

It’s an amazing and exciting time to have a baby right now, but always keep in mind, no one has ever done it like this before — you are pioneers that have to machete through the new terrain. Chin up. Hang in there. And remember, you’re doing a great job.

Amen, sister.
Who out there just gave a big sigh of relief?  Isn’t it nice to know that we’re all in this together?
Hope y’all have a great start to your week.  And relax, you’re doing a wonderful job…trust me!
As a mother, I’ve learned to take things slow.  What’s the rush?  Life’s too short!

9 thoughts on “How I Do It: Motherhood Rocks!”