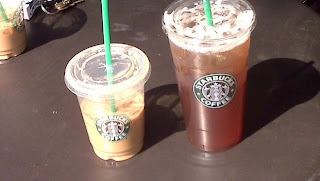 Grande vs. Trenta – Courtesy of tbo.com

Crazy News:  Starbucks is going to sample an even larger size drink.  Right now the largest size they have is the Venti, 24oz.  ‘Trenta’ means thirty in Italian.  They’re trying the new larger size in Tampa and Phoenix.  They haven’t released yet whether or not they will expand the Trenta to all Starbucks locations.

Has anyone seen the hilarious E-Trade commercial with the baby boy apologizing to his girlfriend, and the “milkaholic” part.  So funny.  Well, Lindsay Lohan is trying to sue E-Trade $100 million because they used her name in the ad, um, just her FIRST name.  So stupid.  She said when the baby girl says, “And that milkaholic Lindsay wasn’t over?”  that they were insinuating it was meant to be her.  Good luck on getting that ad taken off the air, and getting that money.  She’s crazy?!  Read more here.

One thought on “Trenta What?”