Well, now you have a great excuse!  I just got this Shoebuy coupon emailed to me the other day, and it’s a pretty nice one.  I took advantage of this coupon over Christmas last year and bought myself a pair of gold Jack Rogers for 20% off, since I love my platinum ones so much.  So my $96 sandals became $76!  The best part…they have free shipping, free returns and the item ships the same day.  Can’t beat that!  Hurry though, the offer ends Monday, March 8th!  Just order whatever shoes you want, and they’ll add in the discount at check-out.

Oh, and if you’re really liking these Jack Rogers and this is still a little much for you to pay, Target actually carries a knock-off of Jack Rogers too, for a lot less, $19.99 to be exact, just not sure how good the quality will be.  Click on the link below to check it out. 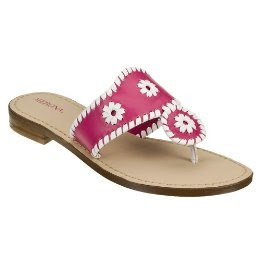 Courtesy of ESPN.com
All you Panther fans out there, Quarterback Jake Delhomme was released from the Carolina Panthers yesterday.  It is such a great move for the team, but kind of sad in a way too because he had been there for so long, since 2003.  I still remember being there when we were losing so terribly in the first game in 2003, when Rodney Peete was still our main quarterback, and John Fox put in Delhomme, and we ended up coming back and winning the game!!
Well, in the last year or so he hasn’t been playing as well, so I’m not surprised Fox let him go.  I think it was a long time coming.  I mean last year he threw 18 interceptions.  Our back-up quarterback is Matt Moore.  Hope he can fill Jake’s shoes!  Guess we won’t know until this fall…
And Julius Pepper (UNC grad) was released too.  That wasn’t a big shocker, we just couldn’t afford him anymore, and this past season, he didn’t even do too much, definitely not enough to let us pay him $1 million a game anymore for another season.  Ridiculous!

One thought on “Need a New Spring Shoe?”