…whose guests have outstayed their welcome.  Found these here, and thought they were pretty funny, and perfect, now that Christmas has come and gone.  Hint, hint, guests…gone!  Haha.  Enjoy! 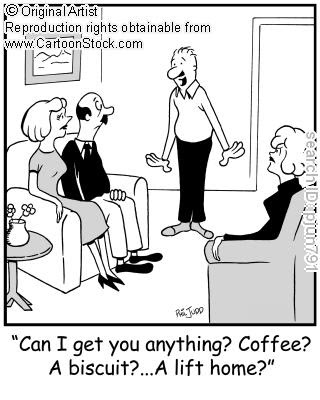 Stop being a good host

Your guests will never leave if they feel wanted, so your first move is to pull the welcome mat right out from under their feet. You can begin by shutting down your washing facilities. Let’s be honest: Nobody wants to sleep in their own filth, but that’s precisely what your houseguests will have to put up with when you inform them that your washing machine is “on the fritz.” After five days of wearing the same soiled pair of jockey shorts, they’ll be more than happy to ship off to a house with properly functioning appliances. While you’re at it, you might also want to stop being their personal chef. It has been said that man can’t live on bread alone, but why stop there? Take away their bread, cold cuts, condiments, and frozen French fry privileges and then see how they react. Cutting off food supplies is a tactic that has been used by nearly every army in the world and now it can be used by you.

Tell them someone else is en route

What’s a little white lie among friends? Boot out your houseguests by letting them know their beds have already been promised to a new group of freeloaders. Just be careful to set exact dates and be certain your alibi guests aren’t someone they also know.

If all else fails, simply ask your houseguests to contribute financially. You can start by asking them to buy groceries and to contribute to your utility bills. If you’re callous enough you can even demand they pay rent. Just make sure that your rates aren’t more attractive than your town’s cheapest motel or they might stay even longer.

Nobody goes on vacation to have their hands worked to the bone. By assigning your guests specific chores you’ll be sure to make them look for an easier, less strenuous living arrangement. Bear in mind that the chores don’t need to be back-breaking, but they do need to be constant. Sample tasks can include mowing the lawn, vacuuming the house, walking the dog, changing the baby, and arranging the contents of your fridge in alphabetical order.It’s time to bring out the big guns for getting rid of unwanted house guests…


Leave them at home alone

Nothing makes guests feel more unwelcome than ignoring them completely — just ask Kato Kaelin. Treat them like the parasites they really are by leaving them at home when you go out for a night on the town. You don’t need to be malicious about it, but you do have to let them know that you have a remarkably busy social schedule that doesn’t include them. If your houseguests aren’t entirely clueless they’ll eventually get the message and go away.

There’s no time like the present to finally paint your house, reshingle your roof and operate all of your noisiest power equipment. In many ways, beginning a major home renovation in the presence of unwanted houseguests is a win-win proposition: either the guests will depart before the real work begins or they’ll offer to help out, giving you an invaluable source of slave labor. Projects you might want to consider include painting and flooring, concrete repair, shed demolition, and sandblasting your guests at close range.

Lock the doors and pump up the volume as you prepare for a tortuous diet of Saturday Night Live alum Rob Schneider. Watch your houseguests writhe in agony as they watch multiple viewings of Judge Dredd, Down Periscope, The Animal, and Deuce Bigalow: European Gigolo. If they’re not ready to leave by the time Home Alone 2 comes on it’s time to call in the Marines.

Nobody — and we mean nobody — wants to be around someone who’s clinically ill. When it comes to faking an illness you have two choices: You can either simulate an old stand-by like the flu or you can create your own mysterious ailment. The benefit of creating your own disease, of course, is that it can be as contagious and threatening as you like. Some names you might want to consider include Mad Ferret Disease, Avian Pelican Flu and Rocky Mountain Spotted Dick. Regardless of your choice, make sure to lay it on thick with frequent trips to the washroom and plenty of coughing and sneezing fits.

And one thing not to do…

Turn off the charm and turn on the gas

A woman from Victorville, California, tried to get rid of unwanted houseguests by gassing them. According to police reports the unnamed 51-year-old woman became desperate after a pair of drug-dealing houseguests turned a one-night stay into a six-week layover. Uncertain where else to turn, she eventually opened her oven’s natural gas line in hopes of driving them out. Even after filling the apartment with gas, however, the houseguests remained until firefighters arrived on the scene and evacuated the premises. There was no explosion and the two men were subsequently arrested for selling cocaine.

Showing your guests the door

In the future, avoid troublesome houseguests by refusing to offer your home so willingly. Instead, agree to meet out-of-towners at neutral locations like coffee shops, bars and cultural events. In the end, learning to say no gracefully can be much less trouble than entertaining unwanted guests.If you do choose to entertain guests, agree on firm arrival and departure dates and always make sure that you’re comfortable with the duration of their visit. So, how long is too long? In the words of Benjamin Franklin, “Fish and visitors smell in three days.”