What an inspirational way to win gold for Canada’s first gold medal at the Vancouver 2010 Olympics!  Alexandre Bilodeau won for his whole country, but most importantly for his older brother, Frederic, who suffers from cerebral palsy.  Watching this last night was AMAZING.  Everyone was cheering for Alexandre, no matter what country you were from.  Every time that he skied, the camera always shot to his older brother cheering him on, explaining that Alexandre always said that Frederic was his inspiration for competing and wanting to win.  He even said that if he did win gold, he would win it for his brother.  How sweet and loving is that!  Okay, don’t cry yet.

From NBC.com:
“On a night made for raucous celebration — red mittens thumping, little boys in the stands hugging their moms, even an Olympic volunteer standing on the course, post-race, waving a Canadian flag — there was a poignant scene, as well: The one of Bilodeau’s brother, Frederic, who suffers from cerebral palsy, cheering in a wheelchair near the bottom of the course behind the fence.
Bilodeau said his brother helped him keep things in perspective all these years, during which he has won a world championship, but was also stung by an 11th-place finish in Turin.
“Even if it’s raining, I’ll take it, I’ll go train,” Bilodeau said. “He doesn’t have that chance, and he’s having a smile every morning he wakes up.”
Bilodeau wasn’t leaving anything on the course for this one.”

Further, in his interview after his win, he said that when he didn’t want to train, he would think of his brother and think how he was unable to even walk, and that there was no excuse for him not to train.  He HAD to do it, because he was physically able and blessed with that.  Alexandre said his brother was always so supportive of him and optimistic that he would win.  In another competition, Alexandre told his parents that it was fine if they couldn’t make it, but that they better put Frederic on that plane to come watch him compete.

That’s some kind of love there.  I hope you had a wonderful Valentine’s Day, sharing it with ones you love the most!  And maybe you are enjoying this day more, with a day off, or a husband’s day off.

Happy Birthday Mr. Presidents!
Here’s one of my loves enjoying the snow from this past weekend. 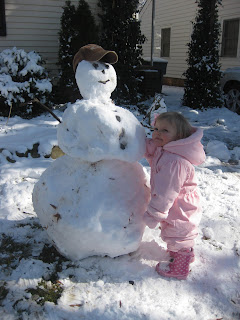