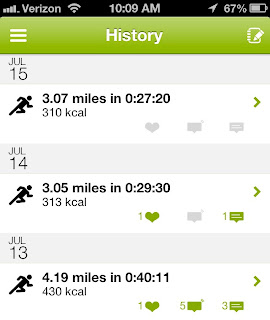 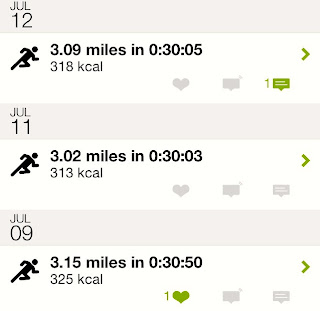 I’ve always been very active, and played sports all my life.  I’ve played tennis the longest (as my parents both enjoyed/still enjoy playing tennis), although lately, they’re playing more golf than tennis.  I played competitive softball for twelve years (starting when I was five).  I played on basketball teams, but that was more for fun (although I think our coaches wished we took it more seriously – it was a church league).  I never really picked up running until after college.

I had never enjoyed the aspect of running, but after a terrible high ankle sprain (during a tennis match…stupid overhead shot), the only conditioning my doctor would let me do, after the six weeks, was running.  He said the movement of tennis (side-to-side) would be too much on my ankle so soon after my sprain, so running was what he recommended.  After being inactive for that six weeks, waiting it out, I was more than ready to do something, and if running was what he recommended, I knew I had to try it.  I ended up loving it, and built up to running small races (nothing over a 5K, and trust me, nothing speedy here people).  But then I started having babies, and that cut out running for me, for a long time.  I did keep up tennis for awhile, playing on a USTA team, while pregnant, but now I’ve just strictly been running.  I’m hoping in the next year or so, we can join a swim and racquet club, and I can play tennis on a more consistent basis again.  Right now, running has been the easiest form of working out for me.  It’s so nice to just throw on a pair of running shoes and go.  No checking in at the gym, no classes at a certain time, it’s just easy.  Although I would like to start the gym back up at some point, right now, it’s all about finding enough time to squeeze in a run.

While I was pretty fit until high school, once college hit, let’s just say I had a lot of fun.  I probably weighed between 145-155 pounds.  I still played most intramural sports in college (our sorority team I was on at N.C. State (where I went before transferring to UNC-Chapel Hill) were the Residence Hall/Sorority Intramural Champions)).  But I still probably ate (and drank) way more than I exercised.

After graduating, I got engaged at 22.  I never wanted to lose a lot  of weight for my wedding, because I didn’t want to look back at my wedding pictures and think how skinny I was.  I know I’m crazy.  I did lose some weight, but nothing too extreme (maybe 140?).  I actually probably weighed less two years later (in 2006), at one of my sisters’ weddings, than I did at my own (when I was on Weight Watchers and started running).  At my highest pregnancy weight, I tipped the scale at 180 pounds.  W and E were both 9 pounds, L was 8lbs, 7oz, and V was 8lbs, 9oz.  I was 9lbs, 9oz!  And then my mom proceeded to have five more?!  On top of that, she had the first four natural, and the last two, she had epidurals.  Talk about a super woman!

Right before I delivered V, I weighed in at 174lbs.  I began the My Fitness Pal app a week after V was born (on November 1st, since I wasn’t breastfeeding), and weighed in at 151lbs.  I hit my goal weight of 130lbs back in March, I think.  I’m 5’6″ and have now maintained 130 pounds for almost four months.  And y’all, I eat.  That’s what I enjoy most, that I’m not starving myself, and cutting things out I love.  My biggest changes are portion control, eating slower (savoring food), making time for meals, and trying not to snack.  No matter how bad I know alcohol may be for my metabolism, that’s one of my vices I’ll never cut out/back.

Everyone’s bodies are different.  Please don’t go by my weights as targets, and my runs as your goals.  While it may encourage you, do what’s right for your body.  If you’re thinking of losing weight, I’d consult with a nutritionist, so they can help you find what’s right for you and your lifestyle.

And honestly, it’s not genetic either.  First off, every single one of my sisters is more well-endowed than I am.  Seriously got the short end of the stick there.  And they’re all teeny and petite (except for the youngest who is 5’8″, they’re 5’5″ and shorter).  And by the way, my mom, who is my height, weighed only 132 pounds at her HIGHEST pregnancy weight with me (and remember, I was 9lbs, 9oz!).  I’m comfortable with who I am.  That’s what everyone should aim for.  Be comfortable in your own skin!  Most importantly, I’m just thankful to be fit and healthy enough to have the energy to run around with my kiddos, and hope to keep it up for years and years to come!

Hope y’all have a great start to your week!  We have SUN today!!!