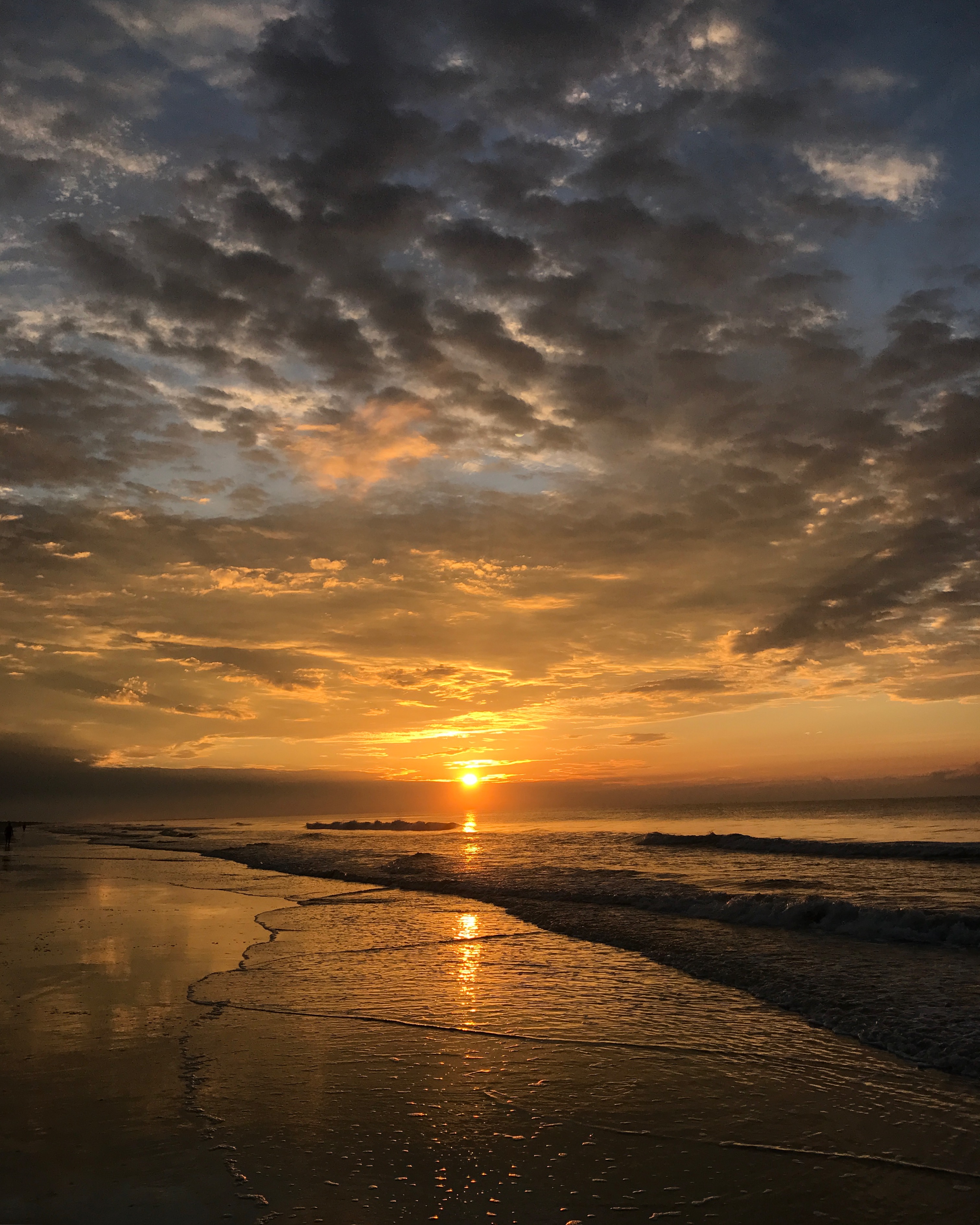 Good morning and happy Monday!  We got back from the beach yesterday and I finished unpacking last night.  How gorgeous was this sunrise I captured yesterday morning?  We’re actually home for a whole week until we travel again which I’m pretty excited about.  Time for me to knock out some things around the house.

As I’ve mentioned before, these How I Do It posts aren’t meant to set a precedent or tell you how you’re supposed to do it with your own children, I’m just sharing mine.  Every mother/father parents differently, and I totally get that.  If you’ll remember, I explained that I started this series almost five years ago and many things have clearly changed since then.  Well, today’s update is going to be much different than my original post on Limitations, but I love seeing how things used to be – when the children were younger.  You’ll find the update on this post highlighted in pink.

How I Do It: Limitations

Gates are the key to boundaries.  One thing that has helped me tremendously with having four minnies running around the house is having swinging gates on doors to certain rooms and to the stairs.  We used this particular kind and it seemed to do the trick.

Little did we know that purchasing these gates for Boozer six years ago, we would get so much use out of them now.  At the current time, it keeps me from having to run around telling L to get out of Boozer’s doggie bowls, and trying to go up the stairs.  And the girls know not to open them if they’re closed, so L won’t get through them.  The gates also keep the kitchen off limits when I’m prepping meals, which helps a great deal.

Update: Okay, so we clearly don’t use baby gates anymore, but as I explained above they truly were key.  And boy, how I miss having the kitchen as an area I could close off with a baby gate.  I know everyone wants an open floor plan and an open kitchen (trust me, I did too), but it was nice preparing meals not having the kids coming through trying to grab a snack or continuing to ask if dinner was ready yet.

Sparse space.  My pediatrician gave me some words of wisdom when Wheeler was little, and I still swear by it to this day: If you don’t want your child to touch the vase, instead of constantly telling your child “Don’t touch the vase!” just move the vase.  So, while the children are young, we don’t have any coffee table books, breakable items, etc. sitting out.  That way we don’t have to constantly tell them not to touch it.  I know this may seem a little extreme, but it works, and it has saved my sanity!  Yes, I have some great pieces that I would love to use to decorate rooms, but I’ll simply save them for when the kiddos get older and more responsible.  And I realize there are things that they have to be told not to touch, like in our case, the fireplace screen, the oven, stove, outlets, etc. but at least with everything else put away, the less scolding you’ll have to do.

Update: We still go by the rule, if you don’t want them to touch the nice decor, don’t leave it out.  While our house is a little bigger since the move from Charlotte to Charleston, it’s hard to keep an eye on four children at the same time.  Understatement, right?  I know that accidents happen, but it’s just easier right now to save my sanity and wait a little while longer before I really take time to decorate our house and unpack our nicer pieces decor (art, books, etc.).

Confinements.  Y’all, our house is small.  I’m not kidding.  Like 1500 square feet small.  We thought when we moved in that we would get a dog, and then move out before children…well, six years later…and we’re still here.  We’ve clearly made it work for us, but it definitely has its challenges.  Our problem was that they we bought it at the height of the housing market, and then the market crashed soon after we moved in (terrible timing), so it’s been hard to try and sell it for so much less than what we paid for it, back in 2006.  So, all in all, with us having such a small house, it’s easier not to have things sitting out (clutter).

And I know I may seem crazy in saying this, but having a small house does have its benefits, I mean it’s a lot easier to clean for one thing.  We definitely maximize every square inch of this place…which makes for no dust and no wasted space.  While there are advantages, there are a million disadvantages to every positive thing to this house (i.e. while it’s easy to clean, it’s easy to get it messy too).  But for the time being, I’m content.  I always try and stay positive and realize no matter how small of a house…it’s OUR HOME.  I’m so blessed with my precious family, and thank the Lord everyday for that.

Update: So that 6 years of 1500sq ft turned into 8 years and when we moved to Charleston, we put our house in Charlotte on the market and sold it in a day.  Such a blessing!  After two years of living in a condo downtown, we wanted a dog.  So we moved into our next house at the height of the market back in 2006, got our beloved Boozer and had in mind that we’d live there two years and move out.  Well, the housing market crashed in 2008, so unluckily for us, we were stuck.  We still loved the house, I mean it had so much personality, the cutest little pre-war bungalow.  I honestly still miss it!  We just knew if we wanted children, we’d clearly need more space.  We tried putting it on the market at times, but never got the offer we wanted, so we stayed.  And I’m so thankful we stayed.  That was our home, no matter how small.  I feel like my children are all closer because of it.  We brought all four children home to that house and it will forever be special to us.  I knew when someone else bought it, that it wasn’t our home anymore.  But I was still so worried they’d buy it and tear it down, but they didn’t.  And we still love driving by and seeing it.  Brings back so many wonderful memories!

As for our house in Charleston, as I’ve had many of you ask, after two years we’re still in a rental.  Ever since moving into this house back in February 2015, we still absolutely LOVE our neighborhood and our neighbors!  We’d ideally love to buy our rental, but the owners love it too, so they’re not ready to part with it.  We aren’t feverishly looking for another house right now.  Our family is content right where we are, but if something catches our eye, we just may jump on it.  Who knows.  I do want to have a house of my own that I can decorate however I want, but for the time being, that can wait.

Sleep: If you’ve been following awhile, you’ll know that even while we lived in that 1500sq ft space, all of my children napped at the same time.  Back then, I was working early mornings at the desk at Hillard Studio Method from 5-7, but that was when the kids were still sleeping so that worked out perfectly.  It was close by and that’s also when I’d get my work-out in, but there wasn’t much time for blogging.  So during that period of my life, I found time to blog while the children napped in the afternoons.  They usually all napped for at least two hours, so there was plenty of time to knock a post out.

Sleeping Arrangements: Okay, so how did they all sleep at the same time, in a 1500sq ft and not wake each up?  At one time, I had Wheeler who was 4 years and 4 months old, Effie who was 3 years and 7 months old, Logan who was 13 months old and Vaughn who was a newborn.  I never had anyone come and stay with me after each of my children were born, just would’ve added to the crazy in such a small space and I was pretty adamant about getting everything back to normal as soon as I could after each child was born.  Come to think of it, I don’t think my parents or inlaws ever stayed at our house in our old house.  But there wasn’t ever a reason to, since they both lived in Charlotte too.  So our house had two bathrooms, and three bedrooms and a landing at the top of the stairs.  We put the boys in rooms by themselves, the girls shared a room and Lanier and I had our bed on the landing at the top of the stairs.  We made it work.  The only true room we’ve decorated since the move is our bedroom.  Finally, our own space.  It’s no longer a room that we constantly switched around as each child was born.  And I love having my own space!

I hope this gives you a little more insight into how I make it work!  Next Monday, I’ll be discussing family involvement and errands/outings.  Challenging, but fun!  And this one will definitely include an update, as we no longer have family in town after the move.

For more recent How I Do It posts, check these out:

Hope y’all have a great start to your week!

6 thoughts on “How I Do It: Limitations + House Update”