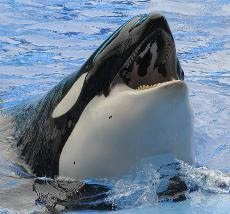 This has been the ongoing question about the killer whale that killed one of his trainers about two weeks ago.  Tilly has been a part of three deaths that have occurred at Sea World.  Three!  Um, after the first death, wouldn’t you wonder whether or not you should be dealing with this whale anymore?  Sea World says the big draw of Tilly, is that he is one of the largest killer whales in captivity, and is over thirty years old.  I’m sure the sick people at Sea World will even love it more, if they continue to keep Tilly, knowing he will draw larger crowds of people wanting to see the “killer” whale.  Did I mention he killed his last victim by grabbing the trainer’s ponytail, and yanking and thrashing her down to the bottom of the pool, during a LIVE PERFORMANCE??  How awful!  I mean, he’s almost begging to be let out into the wild.  I say release him!  Some are even saying kill him.  Um, he’s a KILLER WHALE whale, people.  Come on.  The people at Sea World knew what they were getting themselves into.

Do you remember Keiko, the killer whale that played Willy, in Free Willy.  Well, there was so much publicity about freeing Keiko that they did indeed free him, but it wasn’t a successful attempt.  Every time they let him go, he would follow the boat back.  Poor thing.  He ended up only living until he was five years old, dying in semi-captivity.

What do you think?  Release, keep or kill Tilly?