Sadly, my Carolina Panthers didn’t make it to the Super Bowl this year, but that doesn’t mean I won’t be watching the big game on Sunday night.  Plus, remember sponsors pay big bucks for commercial spots because of the popularity of the event, so it’s always fun to watch how they used their money and creativity.  It’s hard to believe that this time last year we were in Disney World watching the Super Bowl on our hotel tv with the girls.
A few quick facts off the top of my head.  I’m sure there’s more info that many of you die-hard fans could share, but this is what I’ve come up with right now.
Who’s Playing?
Seattle Seahawks vs. New England Patriots
Coaches
Pete Carroll – coach of the Seahawks; used to be USC’s coach and one of the only coaches to win both a College Football Championship and a Super Bowl).  I know it’s part of the job, but can you imagine leaving sunny Pasadena (where USC is) to Seattle (one of the rainiest cities in the US)?
Bill Belichick – coach of the New England Patriots, currently in the news for allegedly knowing something about slightly deflating game day footballs – so they’re easier to catch.  He’s led the Patriots to five Super Bowl wins already.
Quarterbacks
Russell Wilson (Seahawks) – before transferring to Wisconsin, he played football and baseball at NC State in college, where Phillip  Rivers used to also be the quarterback.  He’s only been in the NFL for three season, has already one Super Bowl win, and is getting ready to play in another.  I’d say he’s doing pretty well for himself.
Tom Brady (Patriots) – has won three Super Bowls already.  If you don’t even watch football, you may recognize him as model Gisele Bundchen’s arm candy at events.  They have two children together.  He left actress Bridget Moynahan (pregnant at the time with his baby) for Gisele.
Location
Glendale, AZ
Home of the University of Phoenix
Half-Time Show Performer

Katy Perry
With guests Lenny Kravitz and maybe Missy Elliot)
I did look up ticket pricing just for fun.  At Ticketmaster, tickets range from $6,850 to $28,888.  Yes, you read the right.  For one game.
For those of you who may be attending a party and honestly don’t even know who’s playing, I’m sharing some looks with you to have you acting like you care who wins.  Basically, what’s your favorite color – blue and grey (with a hint of bright green optional) or red, white and blue (with silver too)?  For those of you who are die-hard fans, I hope you like these looks too!  And as you can see below, I’m all about comfort on game day.
**Click on images to shop or links below.** 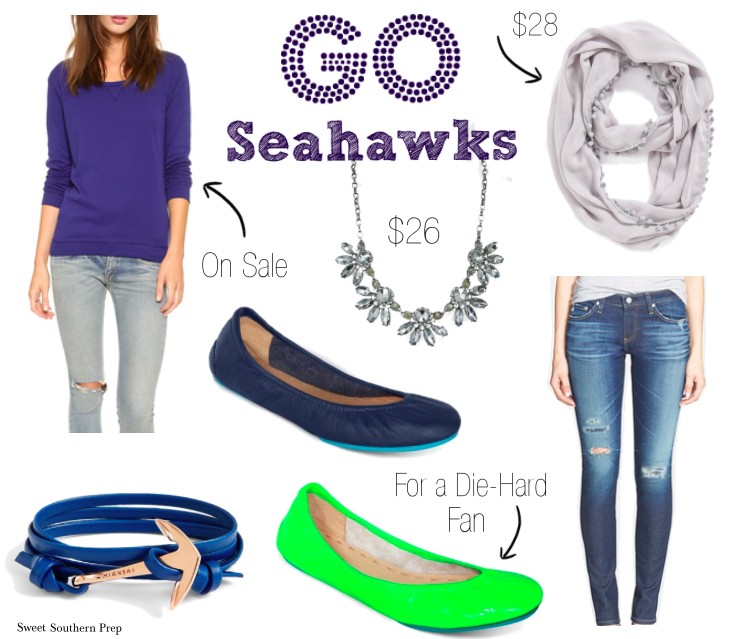 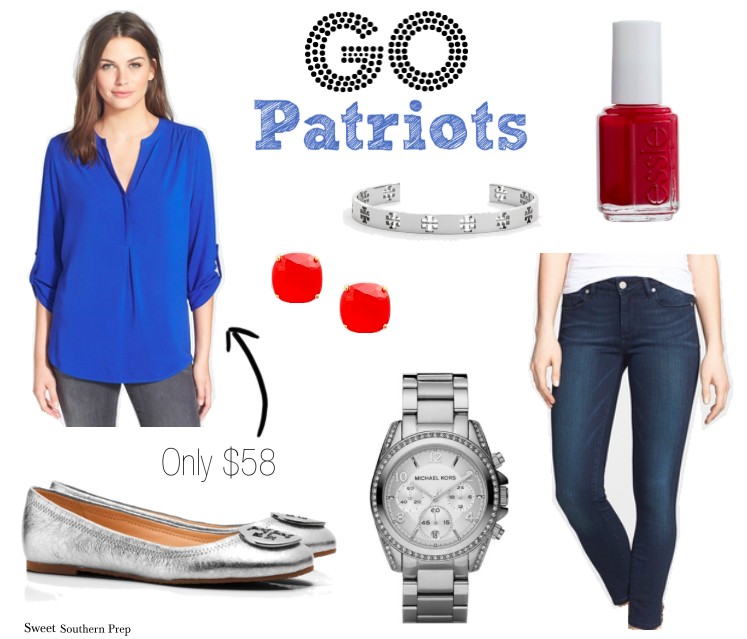 Paige Crop Skinny Jeans // Mixed Media Tunic (only $58 and lots of colors available) // Tory Burch Reva Flats // Michael Kors Blair Watch // Kate Spade Studs // Essie Fishnet Stockings // Tory Burch Skinny Cuff
As for who I want to win?  I’m for the Seahawks all the way.  Have loved Pete Carroll ever since he coached at USC and I’ve got to cheer for Russell Wilson, since he did play at a North Carolina school.

I forgot to mention on yesterday’s post, but little girls’ Jack Rogers are on sale during their Winter Sale!  Great prices and free shipping!  Originally $79, now $45.  And the extra 10% off code was supposed to end at midnight, but it still works, so get them soon.  Enter code: WINTER15 at check-out.
I hope y’all have a wonderful weekend!
TGIF!