First off, I wanted to thank y’all for your skincare suggestions on both the blog and Instagram yesterday.  I think there were over 73 comments on Instagram with lots of fabulous suggestions.  I seriously wish I could try them all!  I was honestly overwhelmed with all the responses, but in a good way!  Previously, I’d used a line called Pevonia. While I liked it for awhile, I just felt like it stopped working. I didn’t have the glow I did when I first started using it.  One of the things I am looking for in my skincare is that the products are all natural.  I’ve tried some of the products y’all suggested both on your blog comments and Instagram. I guess the thing is everyone’s face is different. I’m going to try out some of them, and I’ll be back later, to let you know which lines I loved the most.  Thanks again for your help! 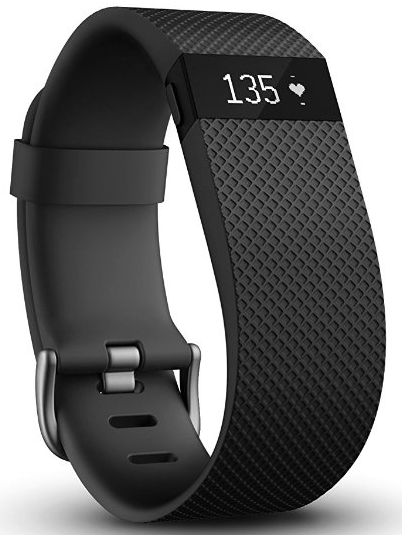 I know a few weeks ago on this post, I asked for suggested on a tracker.  Well, after researching everything as best I could, I went with the Fitbit Charge HR (heart rate) that just came out two weeks ago.  I received it two days ago and absolutely love it!  I must admit I was so confused when I first opened it because there weren’t any instructions to set it up, except a small piece of paper that said to go to an online site and set it up from there.  Well, I went to the site and set it up within ten minutes, and it was super easy. 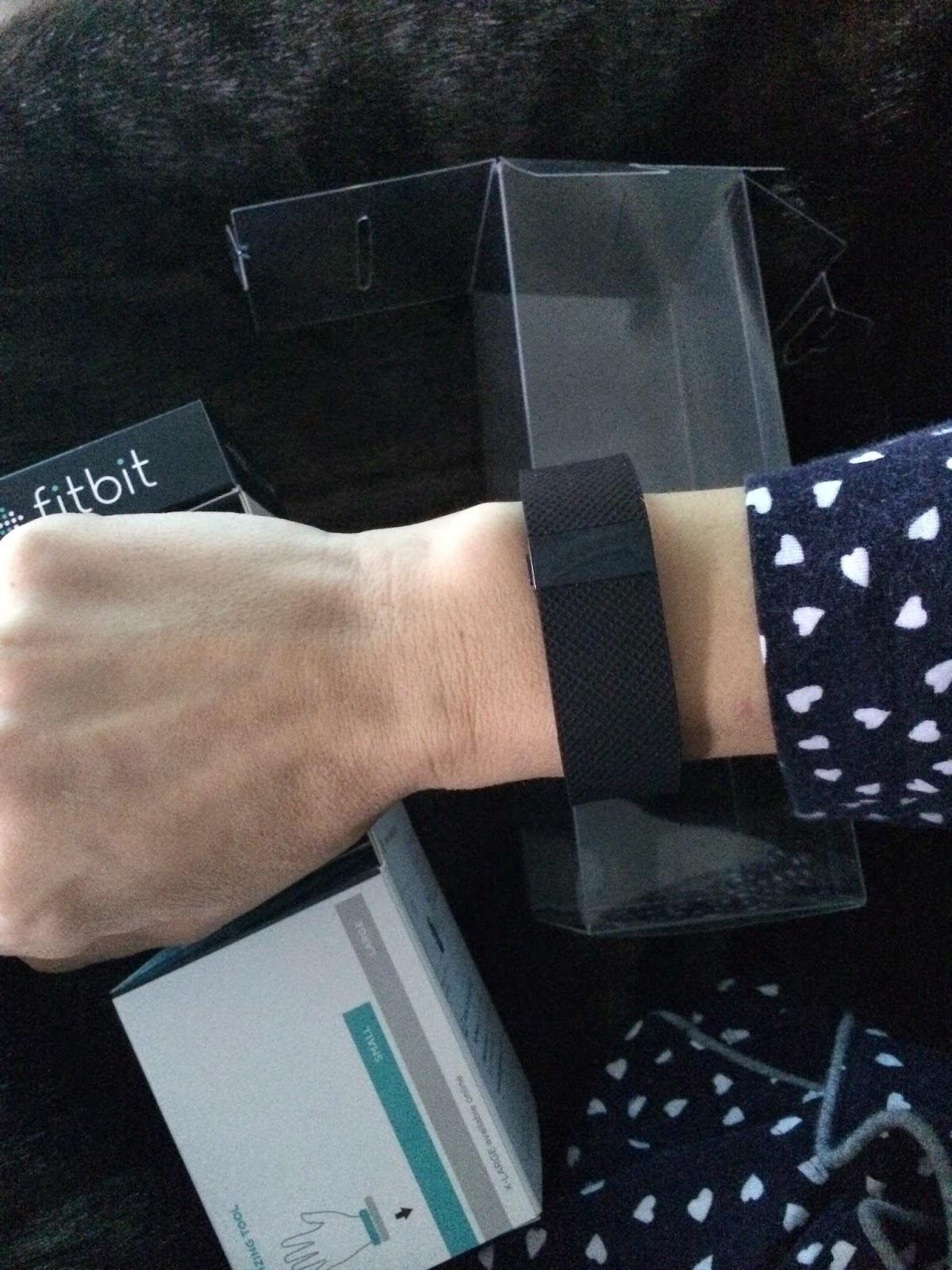 After that I put on my tracker and have already forgotten I’m actually wearing it.  The material is really soft and lightweight, so you really do forget that you have it on.  I wear mine to sleep, to track my sleep activity and it doesn’t get in the way.  Since I’m used to running with an app called Endomondo, I compared the calories burned, and I’ve found it extremely accurate.  You can click a button on the side and it displays up-to-the-minute daily stats (heart rate, distance, calories burned, floors climbed, active minutes and steps, time of day).  I thought I’d have to remember to reset it everyday, and access the site daily, etc. but I don’t.  It automatically syncs everything and starts over the next day, just make sure you have it set to the correct time-zone.  I’ll admit I was a little hesitant to get one, seeing as I wear a watch on my arm most days.  I solved the problem by wearing my tracker on my other wrist.  Simple solution.  My sister also has a previous model of the Fitbit, and after comparing the two, she was telling another sister interested in getting one, that mine is way better.  She’s had hers for a little while, but it only displays four lights on the top of her band and each one lights up as she hits her goal for the day.

While I love everything the Fitbit Charge HR has to offer, I think my favorite thing is that it has gotten me motivated!  I WANT to go on a run now because I know that’ll knock out at least half of my 10,000 steps recommended daily.  It also starts vibrating when you’ve hit your daily 10,000 steps mark.  Found that out yesterday while I was making dinner.  Thought maybe it was malfunctioning, but it was actually celebrating!  It makes me want to go to bed earlier, since it recommends eight hours of uninterrupted sleep.  I’ll admit two nights ago I went to bed at 12:30am, and only got 5.5 hours of straight sleep, but last night I went to bed at 9pm.  I don’t think I’ve been to bed that early in at least a year.  But I did get over eight hours of sleep last night.  If it wasn’t for the Fitbit Charge HR, the thought of going to bed early wouldn’t have even crossed my mind.  You can also see a graph of your sleep activity (see mine from last night above).  It tracks uninterrupted sleep and marks when you move around (awake).  Pretty cool. 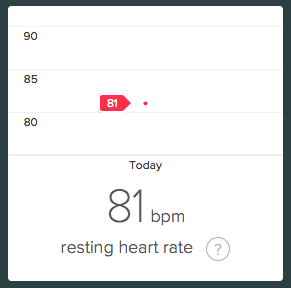 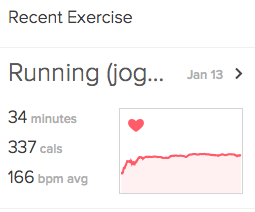 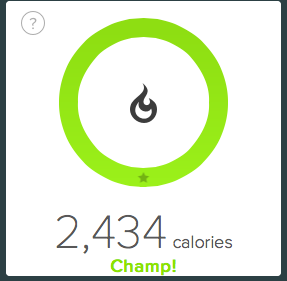 The pics above are a few other features it shows (these were some of my stats from yesterday), but there are a ton more.  It also has perks like it gives you little badges when you meet milestones.  You can also log your food intake and weight. 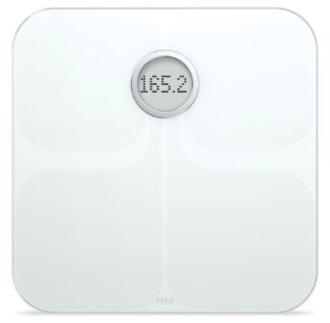 I only weigh myself once a week (probably still have that Weight Watchers mentality).  When I weigh-in on Friday, it’ll be the first time I’ve used the Aria Scale by Fitbit.  This was another reason I went with the Fitbit.  You can buy a Fitbit Scale that automatically syncs your weight to your online personal page, and graphs it.  I’ll still have my old $10 scale next to it, to see how accurate it is.  I have no doubt the Aria will be better. 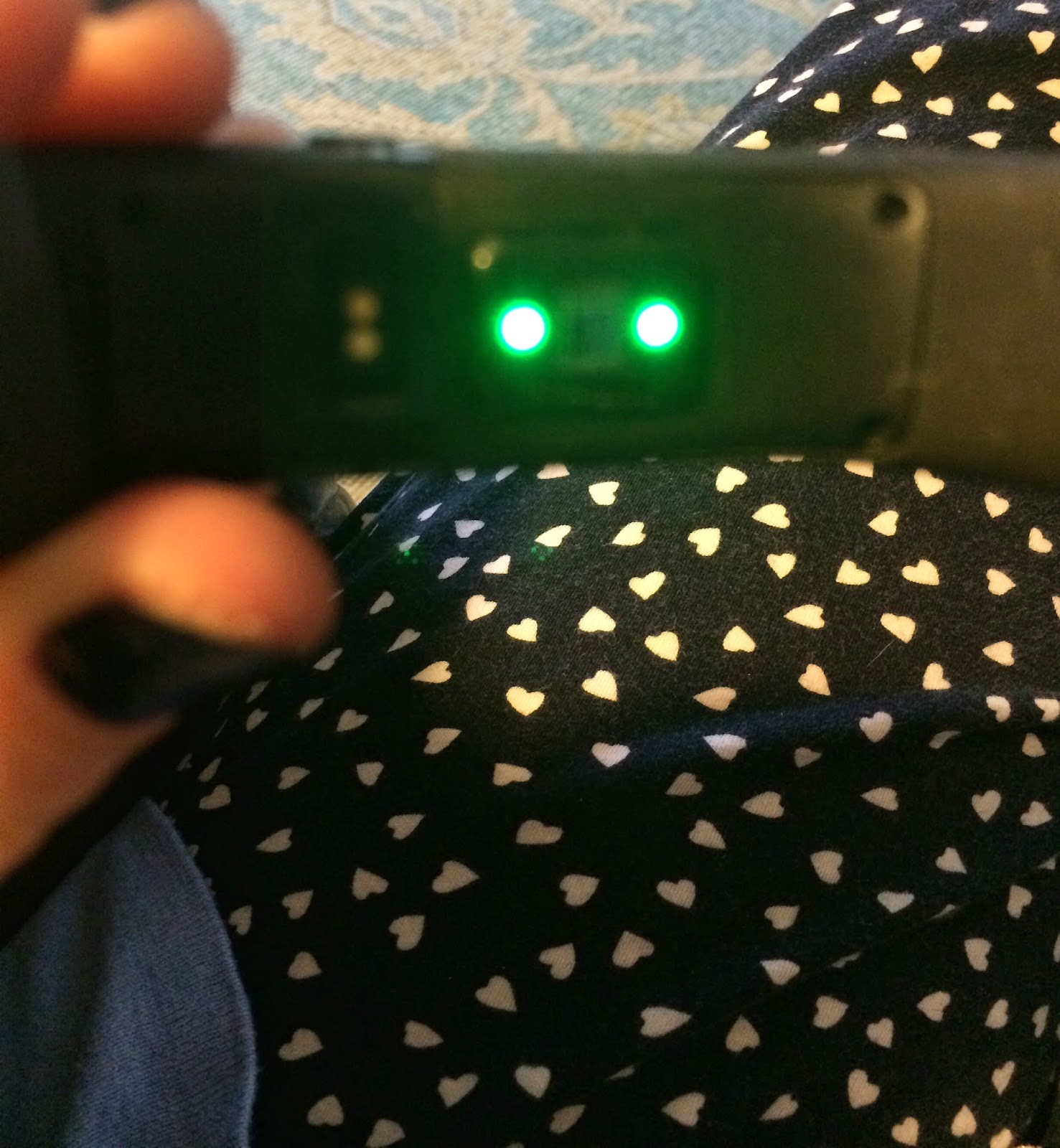 Oh, and don’t let the blinking green LED lights on the back of the tracker worry you.  That’s how it monitors your heart rate.  Don’t worry, you can’t see the lights while you’re wearing it. 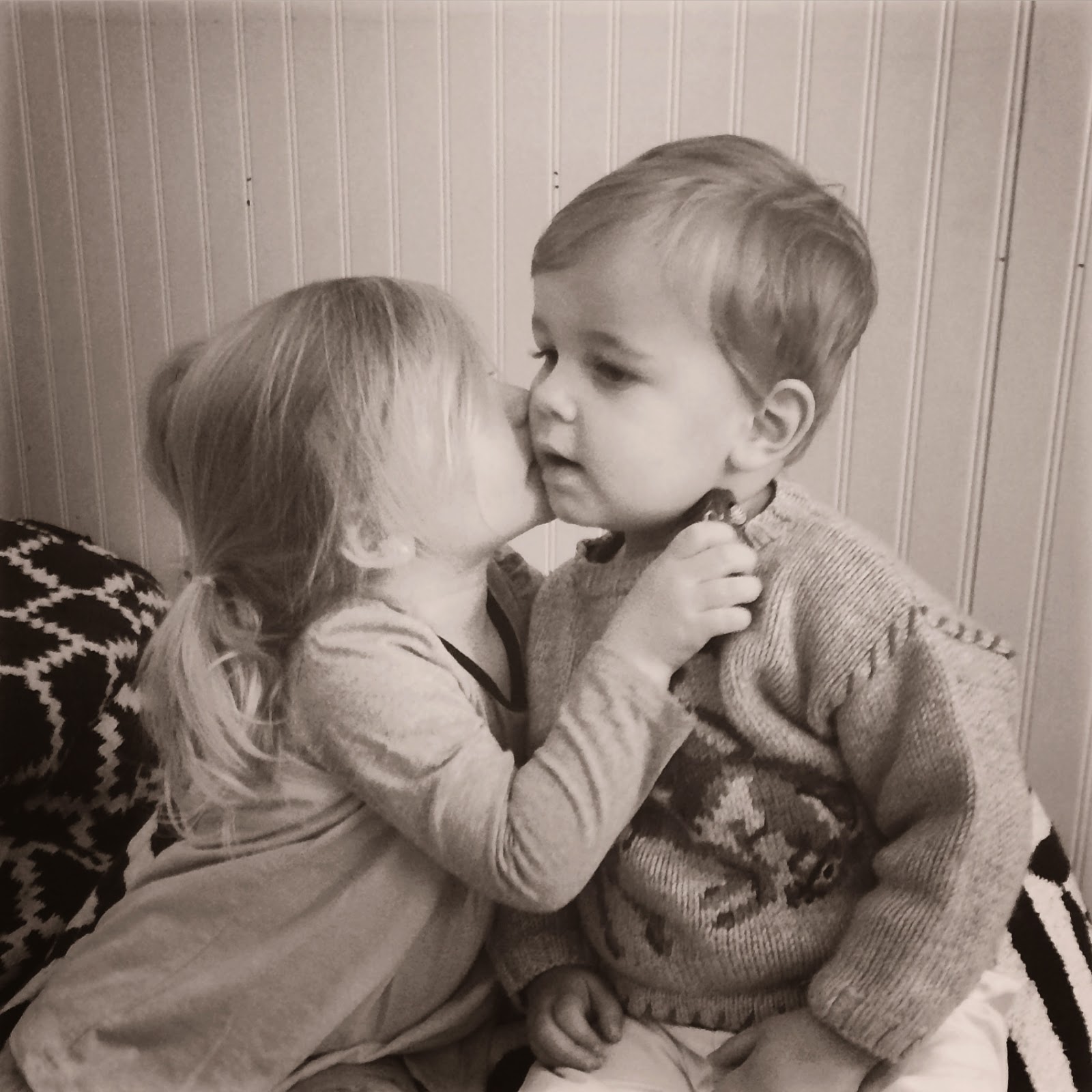 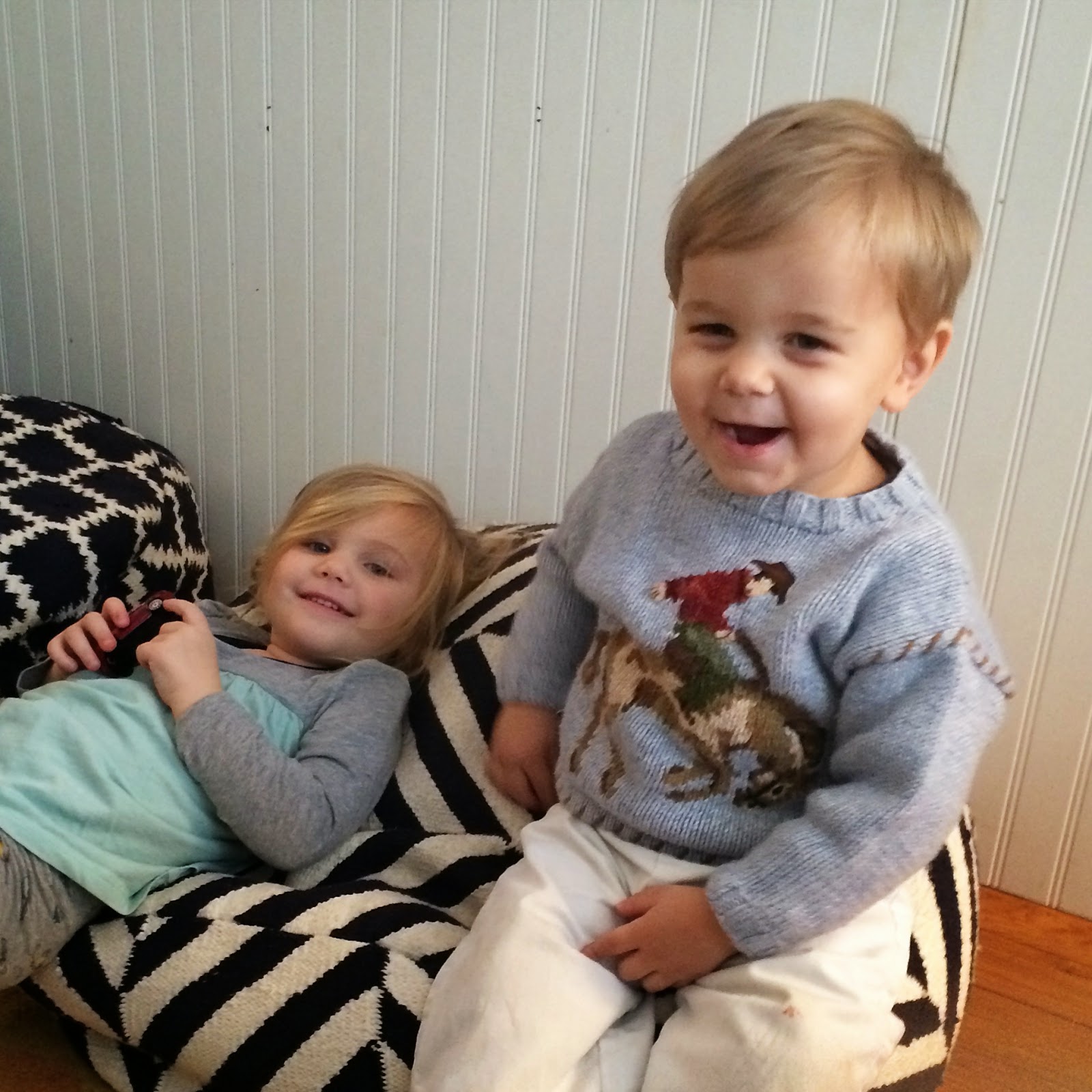 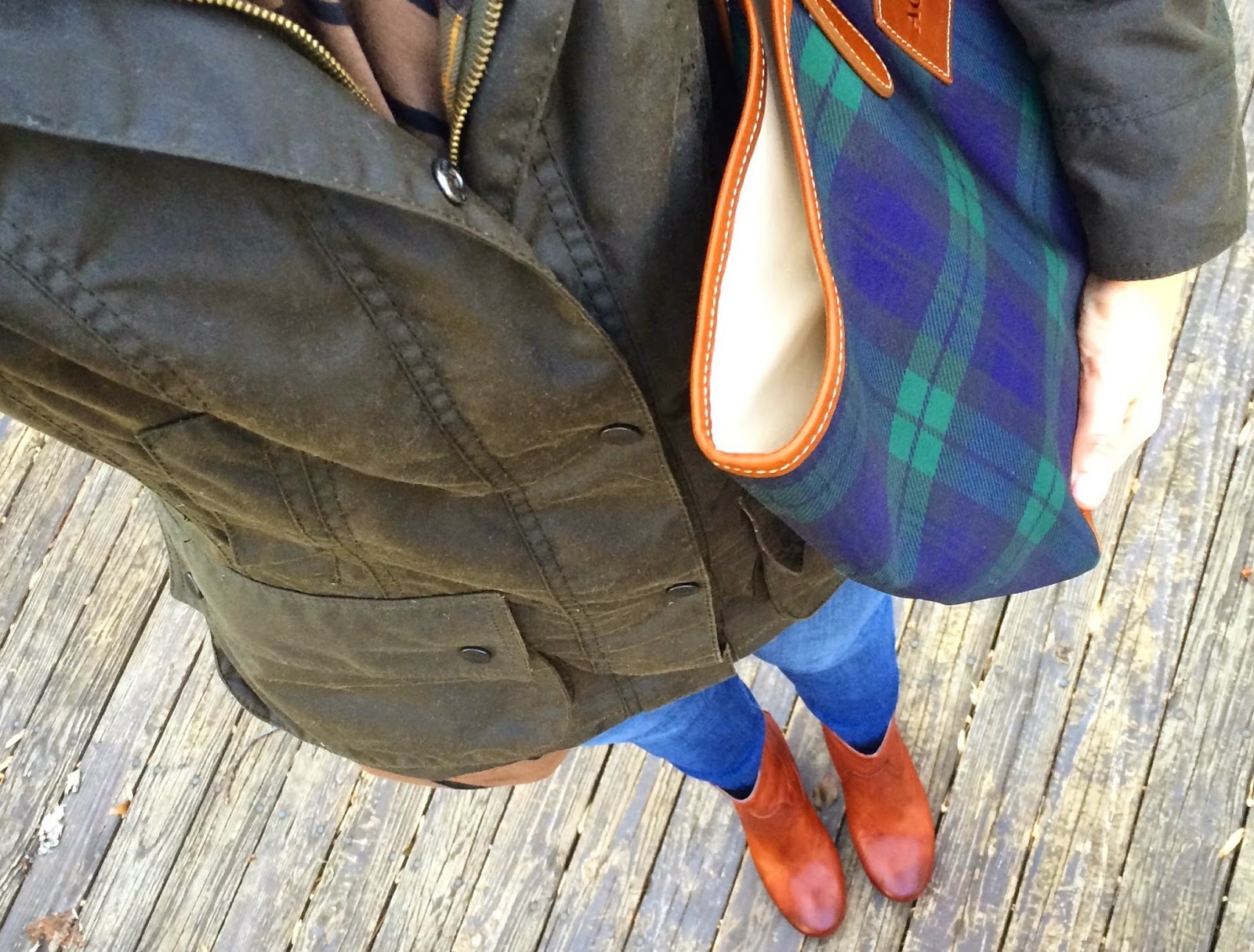 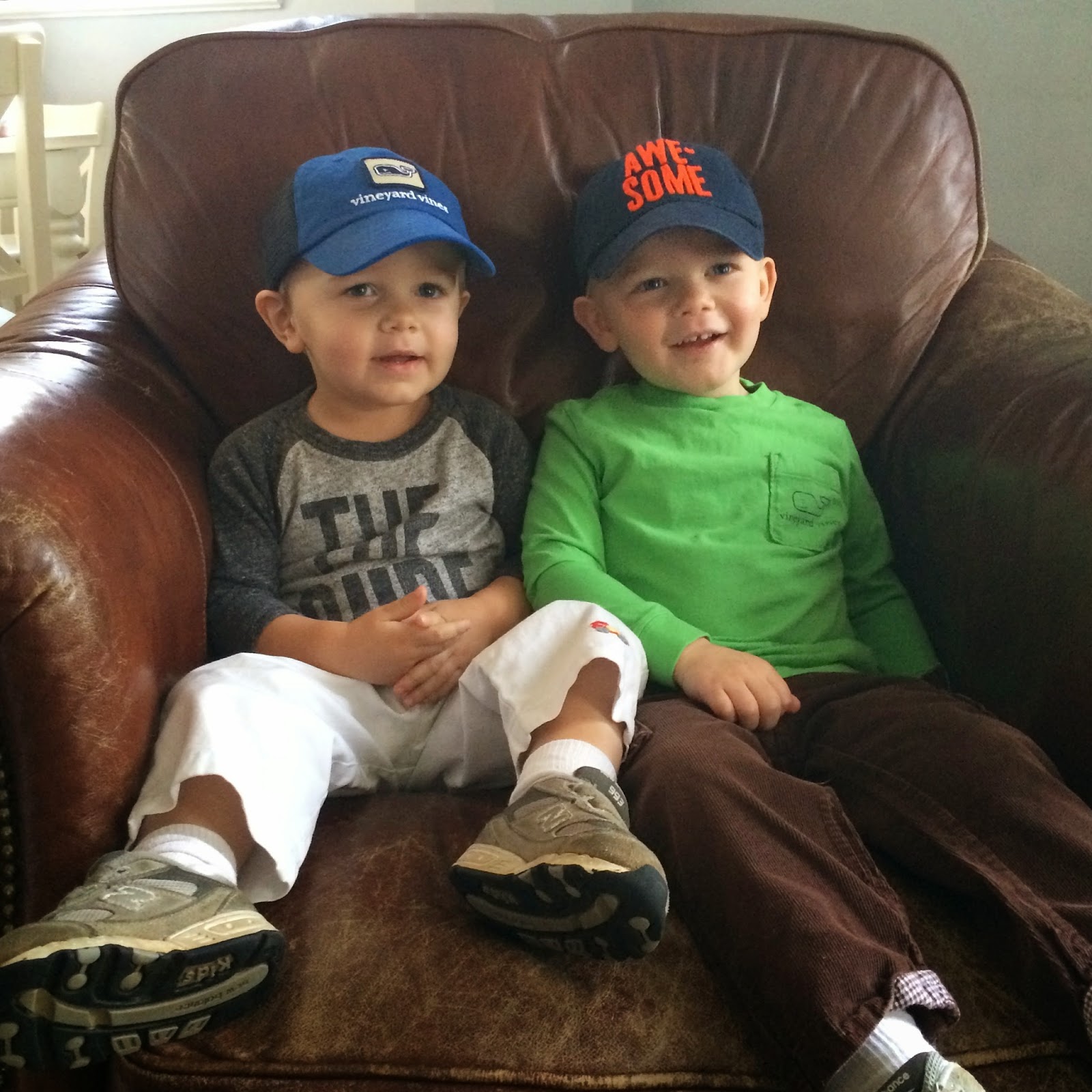 They really are growing up…too fast! 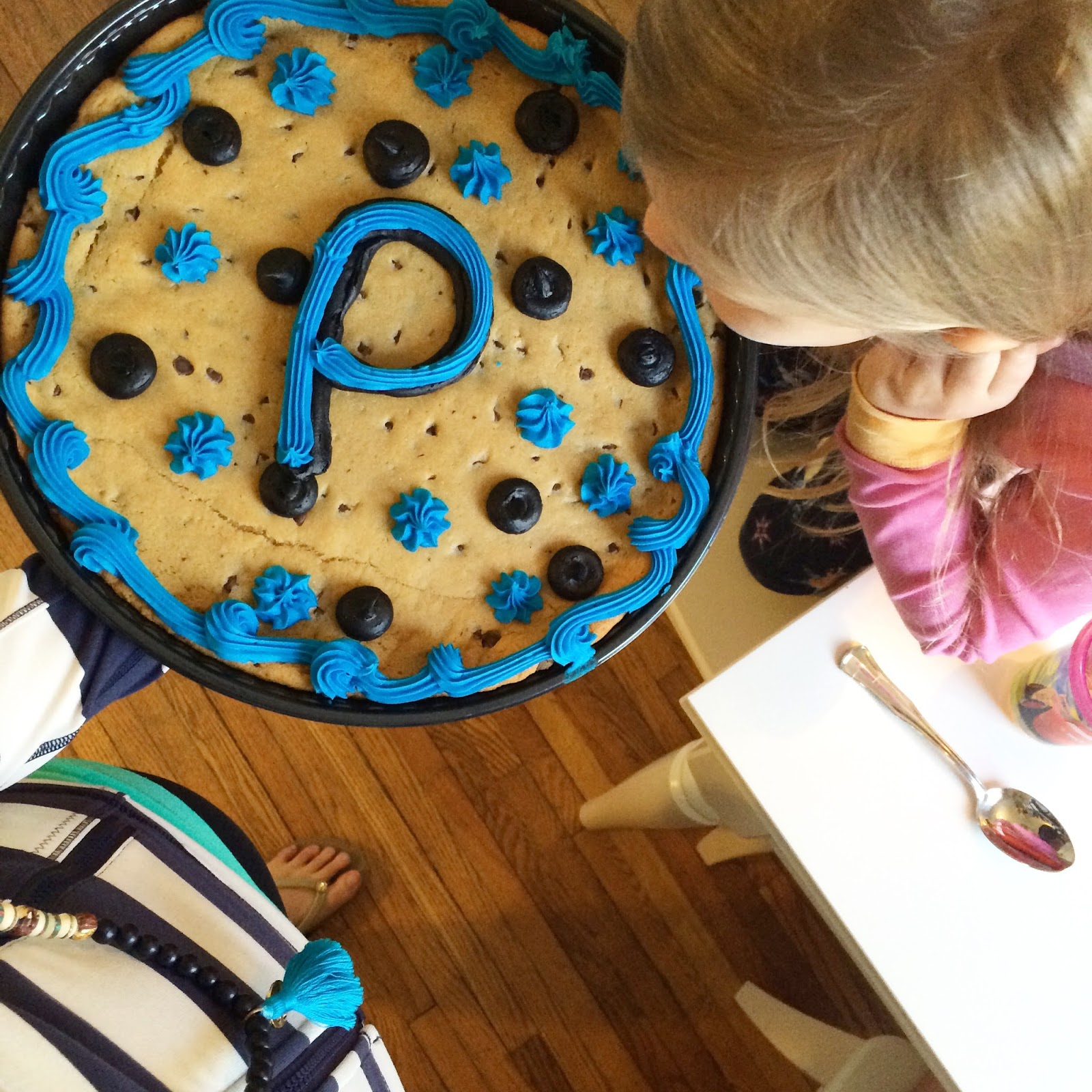 While the Panthers didn’t win on Saturday, we still had a great time celebrating! 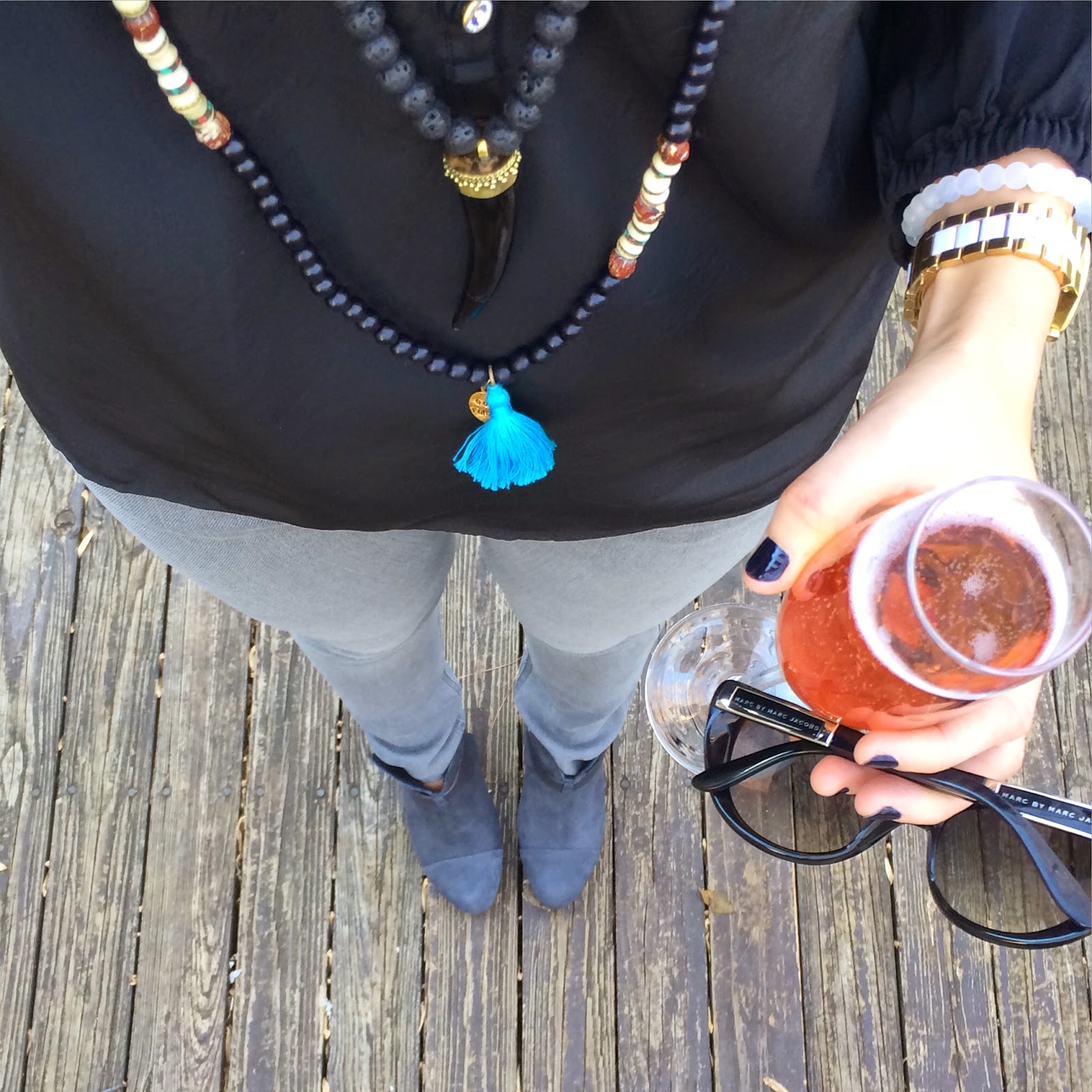 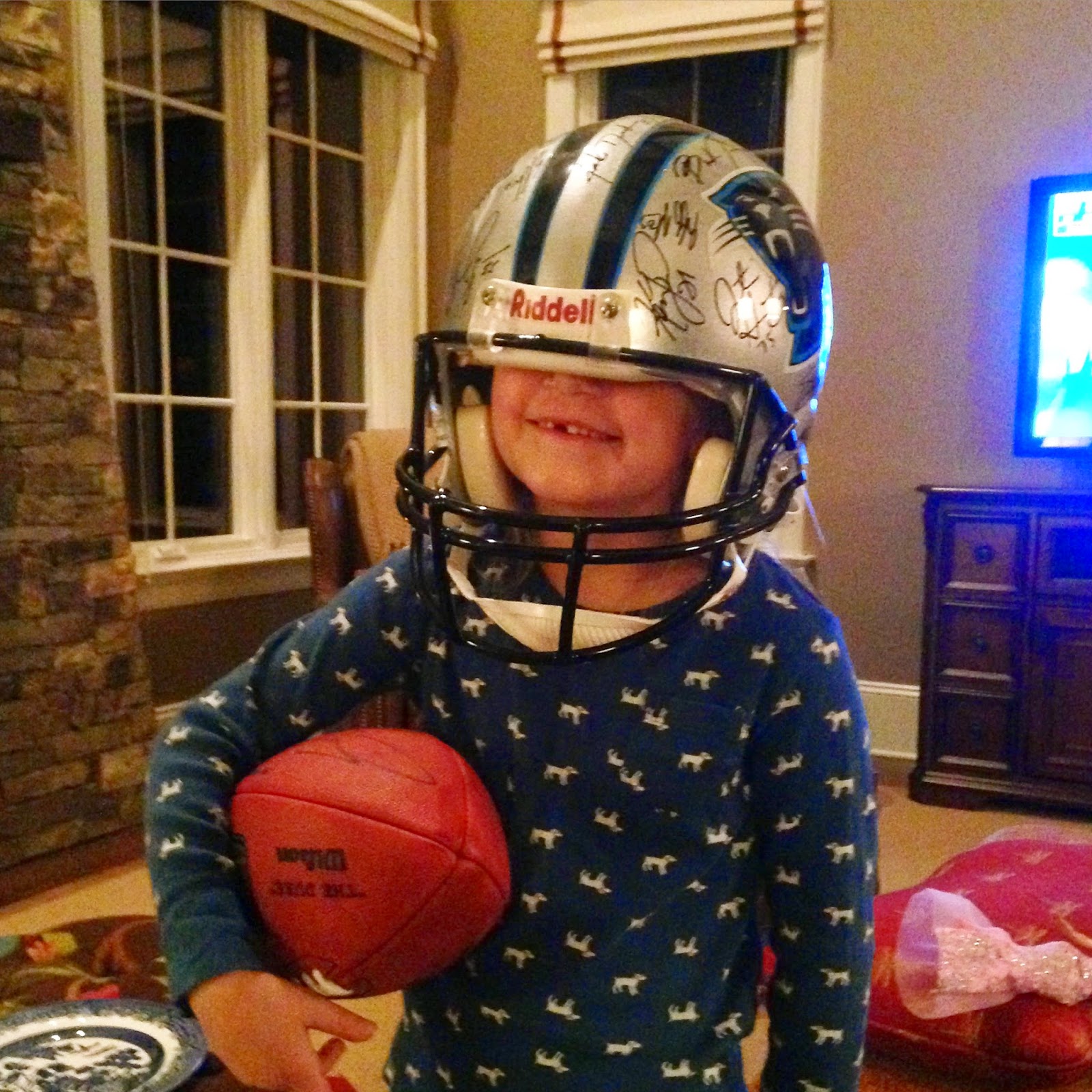 Until next year Panthers.  Y’all had an awesome run! 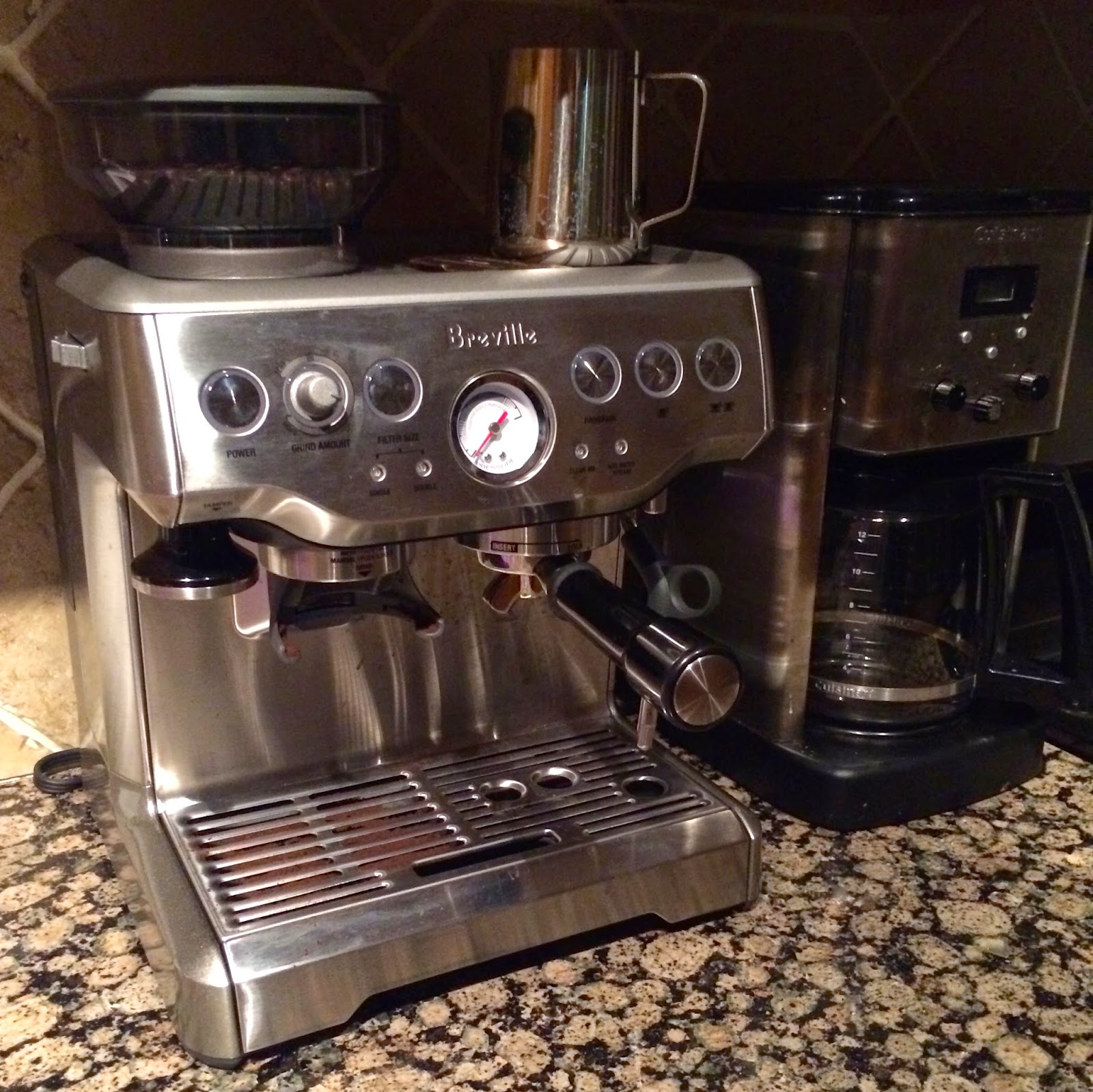 I had a few readers asking about the size of my Breville.  Here’s ours, in comparison to our 12-cup Coffeemate next to it. 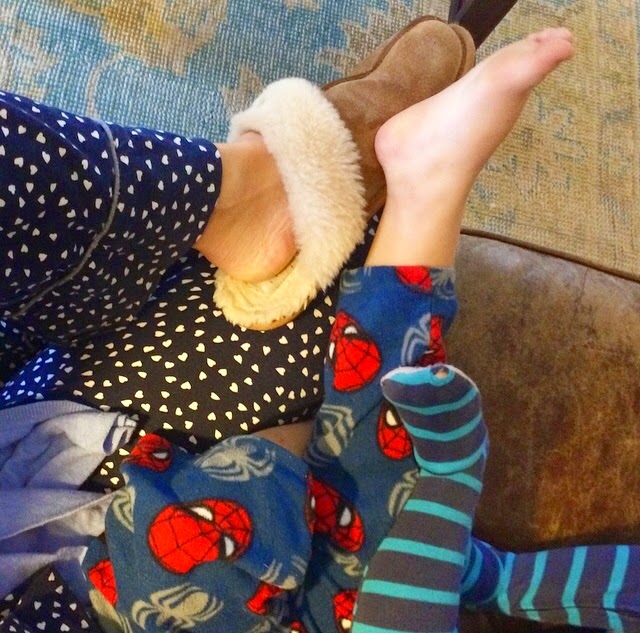