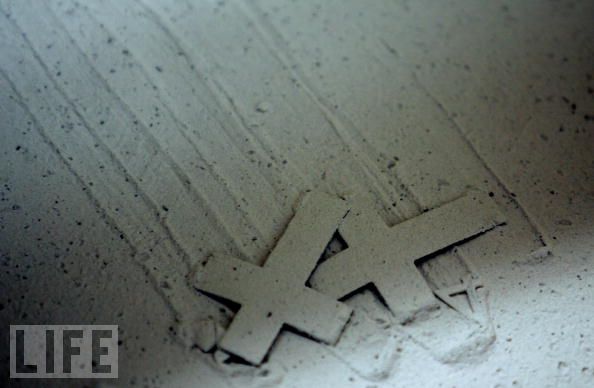 I found this LIFE article a little while back, and thought it was such an appropriate article for today.  Hope y’all have a wonderful Indendence Day, celebrating and remembering those who died for our country.

“BARRE, VT – OCTOBER 24: Stencils used to produce the crosses on a tombstone lie in the powder of ground marble during the creation of a marble tombstones for the burial of military veterans at Granite Industries of Vermont October 24, 2005 in Barre, Vermont. As the number of soldiers killed in Iraq nears 2,000 the plant continues to supply Arlington National Cemetery with tombstones for the burial of soldiers killed in the war. Approximately ten days after an order is received from the Department of Veterans Affairs, a 230lb headstone, made of marble, is sent out. The finished products have been used in funerals for older soldiers who served in WW II, who qualify for burial at the cemetery, as well as for soldiers currently fighting wars in Iraq and Afghanistan. The company also replaces worn out tombstones from as far back as the Civil War.”

Happy 4th of July, Y’all!
Remember my post on hugging here.
It still applies to this holiday, as well.
Article and Photo Credit: 1